Well, the cofounder has just blown up after Trump's tweet suggesting we might want to delay the election. He thinks Trump ought to be impeached immediately. I think what's happening is, a lot of former Trump supporters are beginning to think that he's gonna lose and they're just entering CYA territory for after the election.

I think they're positioning themselves to say, "We knew it. Yeah. Yeah. We knew Trump was toast." That's how they want to be seen after the election when Trump loses, rather than stay on the team and fight for the guy. And then you have others, the Never Trump contingent, who have been hoping against hope that Trump would blow up and get out of there.

And they think he has now with this tweet on mail-in ballots. So they smell blood in the water, and they're out there saying, "Ah, this guy's gotta go." Some are even saying, "You know what? We need to do burn down the Republican Party. We just need to burn it down, destroy it, and start brand-new. Trump has just destroyed everything. We need to blow it up and start new."

THE PRESIDENT: If you do universal mail-ins with millions and millions of ballots, you're never gonna know what the real result of an election is. It's gonna be a very, very sad day for our country. You know, they voted during World War I. They voted during World War II. They went to the polls; they voted. They went to their booth and they voted proudly. But now with COVID they don't want to vote. It's not they don't want to vote. This will be catastrophic for our nation. You'll see it! I'm always right about things like this. I guess I must be, or I wouldn't be sitting here.

RUSH: "I'm always right about things like this." Trump is convinced that mail-in voting is nothing more than a recipe for disaster and it's another one of these fake things have been drummed up -- can't go out in public, can't do this, can't do that -- 'cause of COVID-19. Except you can go protest. You can still do that.

Stephen Miller, in charge of immigration policy in the White House, was on Fox & Friends today, and he explained Trump's tweet. The question here he got here is from Pete Hegseth, who said, "Explain what the White House is wanting to defend integrity in the election."

MILLER: The president yesterday brought the whole nation's attention to the catastrophic problem of universal mail-in ballots. Nobody who mails in a ballot has their identity confirmed. Nobody checks to see if they're even a U.S. citizen. Think about that. Any foreign national -- talk about foreign election interference -- can mail in a ballot, and nobody even verifies if they're a citizen of the United States of America.

Now, this would be happening on a scale of potentially millions of people. In fact, in the Democrat's HEROES Act -- the bill that was supposed to be for coronavirus relief -- they actually have a provision in there barring voter identification as part of any mail-in balloting. That is insane.

RUSH: It is. There you go. Foreign election interference? No identity required? Anybody can get hold of a ballot and mail it in? Nobody verifies if they're a citizen? There isn't gonna be the time to do all this and have the result announced anytime soon.

RUSH: One more Stephen Miller bite. He was on Fox & Friends today, and the question came from Ainsley Earhardt. "President Obama got political at John Lewis's funeral, saying those in power are discouraging people from voting, closing poll locations, targeting minorities, restrictive law ID's and undermining the postal service." By the way, Obama said all that.

Obama literally went after Trump yesterday in the eulogy for John Lewis, and he said all of that. Trump is "targeting minorities." He didn't ever mention Trump's name, but there was no doubt who he meant. "Discouraging people from voting, closing poll locations..." How Trump discourage anybody from voting when the Democrats are doing nothing but trying to get every voter possible to show up?

How does this work?

It's like the Democrats are acting like they're doing things in a vacuum here. "estrictive law ID's and undermining the postal service. Do you think the president is doing any of that," Steven?

MILLER: It's scandalously, outrageously false. How can anybody claim that it is voter suppression to ask if somebody who's voting...? If John Smith is really John Smith? That's it. Simple principle. One citizen, one vote. As for former President Obama, the reality is that for eight years he delivered nothing but failure and betrayal to the people of this country. He sold off our factories to China, he left our borders open to MS-13, and he left violent crime to plague our cities and did nothing -- as President Trump is doing right now -- to send in federal law enforcement to save young black lives in cities like Chicago. 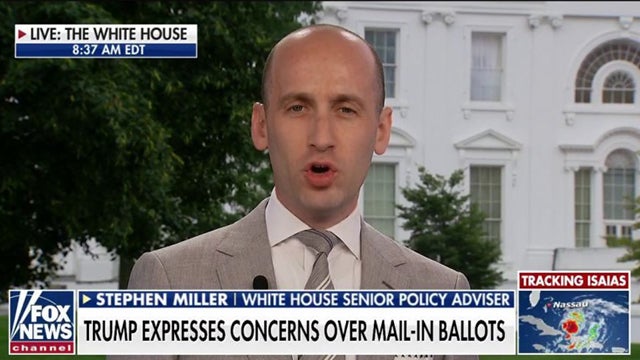 Watch the latest video at <a href="https://www.foxnews.com">foxnews.com</a>RUSH: Well, folks, that's actually true to a large extent. It was Obama who told everybody that there's a new era of decline that the United States is gonna have to adjust to, that our better days are behind us. He actually said that. He said that we're gonna have to readjust our thinking and lower our expectations about the American economy, that we've lost a bunch of jobs that just aren't coming back.

He's out there apologizing for this country for eight years no matter where he traveled, and the thing is, he was saying, we may have come by our wealth and our power in unjust ways. It's maybe built at one time on the backs of slaves and so forth. Oh, that's all... All of that and more that Obama was trying to convince people was true of their own country.